Physical properties associated with TriAx geogrids in roads and platforms: 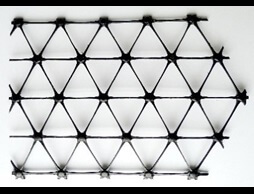 Tensar’s TriAx geogrids are classified as stabilisation geogrids. The properties noted  are associated with this distinct function.

Physical properties associated with biaxial geogrids in roads and platforms 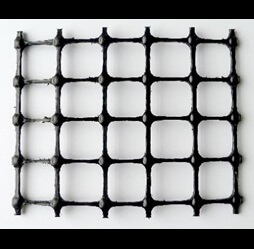 Biaxial geogrids such as Tensar’s SS geogrid are classified as reinforcement products. Tensile strength and associated strain are properties relevant to this distinct function.

Physical properties of Tensar uniaxial geogrids in walls and slopes:

*Long-term design strength is based on project-specific conditions. Partial reduction factors should be applied based on variables such as in-soil temperature and installation damage.

**Ultimate tensile strength is not a parameter employed in design calculations but can be used to identify which product is required.

In the context of geogrids, strength can mean a number of different things, including:

However, when assessing potential performance, other physical properties should be considered, such as:

The maximum amount of load a geogrid can handle before performance is compromised.

This is established through tensile testing, where the geogrid is stretched until it breaks.

Why ultimate tensile strength is not important for geogrid performance

Many geogrid specifications focus on tensile strength, equating high ultimate tensile strength (UTS) with better performance. In reality, however, UTS is irrelevant, particularly when a geogrid is used in the design of roads or temporary working platforms.

In these cases, ultimate tensile strength of the product alone is actually a poor indicator of performance.

This is because the ‘tensioned membrane’ effect—the strength that a geogrid offers when stretched or strained—does not offer appropriate support for the layers above it.

To work, the geogrid has to be stretched. But when a load is placed on it, the geogrid will curve to accommodate this load, similar to what happens when a person sits on a hammock.

Consequently, the pavement will suffer deformation at the level where the reinforcement geogrid is placed. Deformation will also likely appear at the road surface, in the form of rutting, cracks and potholes, reducing its operational life. 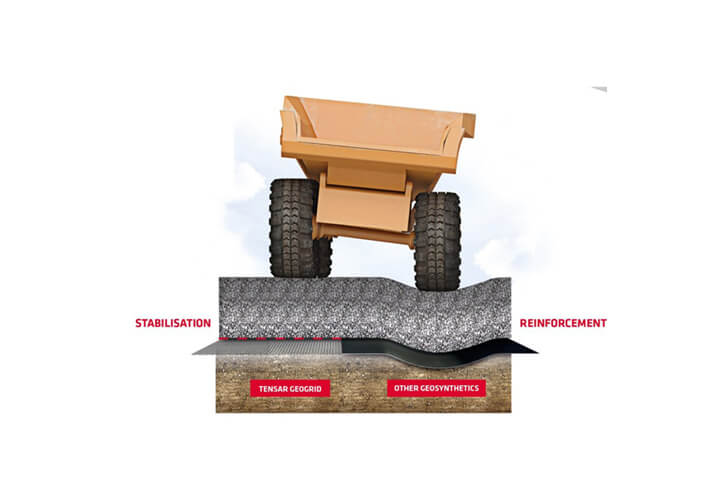 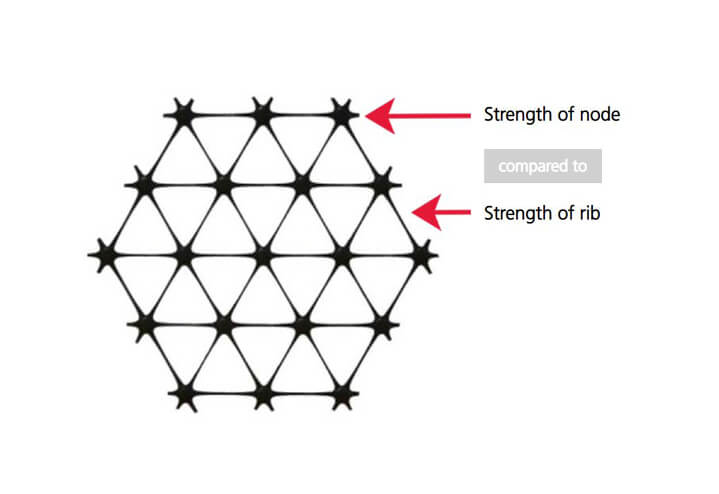 Where geogrids are used to take advantage of the ‘confinement effect’, junction efficiency is more important to performance in road and temporary working platforms than tensile strength.

The confinement effect—where the aggregate catches in the apertures of the geogrid and pushes up against its ribs, preventing the material from moving laterally (sideways).

Pressure is put against the ribs, which are held in place by the nodes. As a result, the efficiency of the node compared to the rib is a much better indicator of:

Junction efficiency is formally recognised by the European Assessment Document

The EAD sets out parameters the European Organisation for Technical Assessment (EOTA) confirms are specific to the distinct function of stabilisation. No such link has been made between any junction parameters and reinforcement geogrids

A geogrid’s ability to evenly distribute a load through 360 degrees, without deforming elastically.

Radial stiffness is a characteristic of Tensar’s TriAx geogrid associated with the stabilisation function, with the geogrid acting as a component of a mechanically stabilised layer in road applications. TriAx’s hexagonal shape provides a more uniform response to the load traffic imposed on the road than geogrids with square or rectangular apertures. 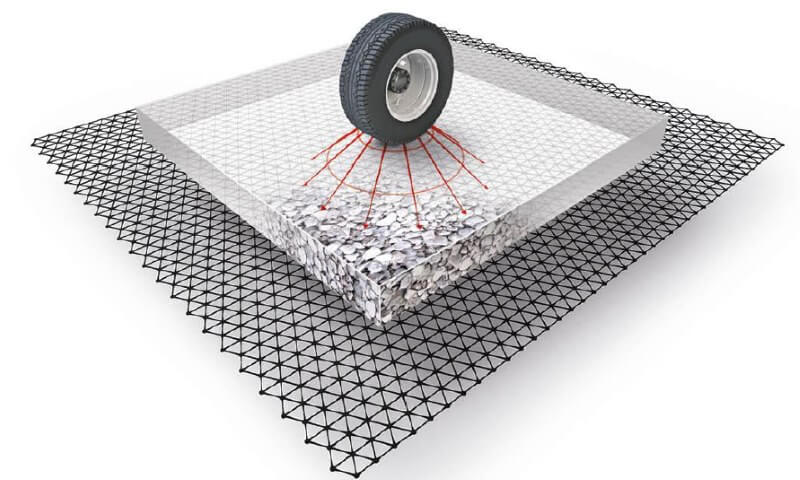 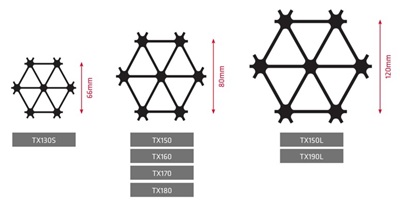 Another measure of stiffness, but not related to geogrid performance in ‘normal’ applications.

Finite element analysis (FEA) sometimes requires a geogrid’s elastic modulus. However, Tensar’s own research has confirmed that the effect of a geogrid should not be modelled on individual product parameters. We have developed an FEA module—contact the Tensar Technology team for details.

When assessing parameters for reinforced soil walls and slopes, the following are considered relevant:

Long-term design strength (LTDS) is relevant in reinforced soil applications—including retaining walls and slope reinforcement—where layers of geosynthetic materials (such as geogrids) are placed within the fill used to form the finished structure.

Unlike roads, which bear a constantly changing load, reinforced soil carries a permanent load throughout its operational life, which could be up to 120 years. Consequently, the design of the structure and load-bearing components (including the geogrids) should reflect this.

Polymers are viscoelastic, which means that their strength and stiffness are affected by temperature and how frequently or how long they bear a load. Under a constant load, polymer geogrids will stretch very gradually as their physical properties change.

Creep strength can be assessed by subjecting geogrids to long-term loading. This involves suspending different-sized weights from the geogrid in temperature-controlled conditions and measuring and recording the strain for a standard duration of 10,000 hours, which is just over a year.

Partial reduction factors—such as environmental effects and the effect of damage caused during installation—should be applied before using creep strength in LTDS calculations.

Uniaxial geogrids are also available in different grades but their geometry is similar across the range.

Get contact information for your local engineer or distributor so we support you to get the right solution for your project today.

This website stores cookies on your computer. These cookies are used to collect information about how you interact with our website and allow us to remember you. We use this information in order to improve and customise your browsing experience and for analytics and metrics about our visitors both on this website and other media. To find out more about the cookies we use, see our Privacy Policy.

If you decline, your information won’t be tracked when you visit this website. A single cookie will be used in your browser to remember your preference not to be tracked.